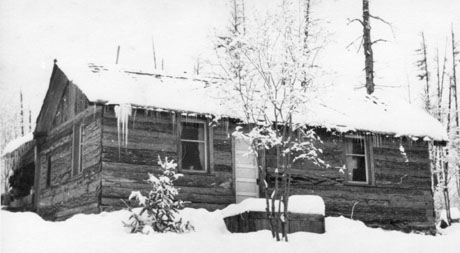 My father drank. So did Mom.

When my father came home after WWII and the Korean War, he was a stranger in his own home. Worse, he was unnecessary. His wife had spent more than ten years essentially on her own, making her own decisions. She had fed and clothed four children, disciplined us, and made a home for us.

I mean, literally, she made a home for us. She bought 40 acres of bush up a mountain at $10.00 an acre. There she built a cabin. We grew up with stories of her bargaining for cheap lumber from the sawmill. We saw pictures of her on the roof with tarpaper, shingles, hammer on her hip, and fathead nails pursed in her lips. We loved the cabin. We loved the bush.

Dad came home from the wars, but a new war brewed in the marriage. We children felt it, feared it, and were controlled by it. Their unhappiness, hurts, and dubious faithfulness clouded whatever sunshiny mountaintop days we had. Anger, meanness and violence became the expression of the liquor, not just from them, but from friends and relatives. I shake my head to think of it… like some dolled-up nightmare from the Ozarks… isolated, self-involved, false, proud, poor, immoral, inbred, ignorant, insolent, and so dangerous… especially to little girls.

My life pattern was set. On sober days, we were loved, taught, nurtured and disciplined. On party or revenge days, we were abandoned, neglected, humiliated, and abused. Like nasty spittle in a wonderful stew, the shadows spoiled the sunshine. Abuse plundered trust.

It was winter. I was eight; my sisters were five and nine years old. We had spent the post-war years hopscotching with the army… Vancouver, Penticton, Edmonton, Germany, Kingston, and now we were back at Mom’s cabin… the cabin Dad resented… the dreaded cabin that named him impotent.

That night, as we slept, a party waxed hot. Our sleazy, toothless Uncle and jealous, eccentric Auntie plied Dad with drinks, egging him on to dig up dirt on Mom, who was Auntie’s younger sister. The topic of the moment was the hated cabin, the symbol of Mom’s pride and rebellion. Auntie and Uncle prodded him, taunting, goading… and he did it.

My father burned down the cabin.

He started the fire on the floor, but Mom put it out, so she thought. For all the threats she had endured from Dad, all the cruel humiliations, this one rang true. Mom hauled us out of bed, hurried us into boots and coats and we went into the darkness.

Our cabin was in bear country… bear country in the middle of the night with one little flashlight for comfort. We hiked a mile down a deer path to Auntie Beth’s cabin. As we fled, the fire burned through the floorboards onto piles of old tarpaper. The cabin went up in flames like a marshmallow in a campfire.

Shame. Shame on you. With a curse, that shame came upon me as if it were my own guilt. And I walked years through a valley in the shadow of death.

By God’s grace, I am whole today… a story of love’s healing and purpose. It was love that brought me back to the sunshiny mountaintop… but that’s another defining moment.

A Second Cup of

Theme book for
Girls' Night Out Events with World Vision

Go to:
http://hotapplecider.ca/meet-us/
for upcoming author signings in your area.